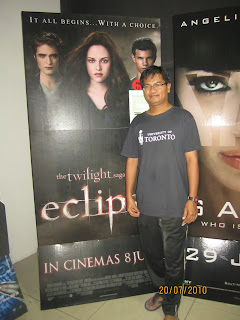 I watched this movie at Pahlawan Mall in Malacca. At least if anything happened after the surgery that I had to undergo, I would have known what had hapened to Bella, Edward and Jacob.

So this story is the sequel to its two earlier films: Twilight and New Moon. Bella was still in love with Edward but at the same time she could not get rid of Jacob. The feud between the vampire and werewolf went on but when a new batch of vampire came into the scene, the vampires and werewolves decided to work together - to save Bella. The movie this time was more exciting because there were more fighting actions, these creatures running and jumping and wrestling with each other. And the audience would be left to wonder whether Bella would choose the dead and cold vampire or the hot-blooded mammal. However Bella had earlier said "Yes" when Edward proposed to her and she was now waiting for the time for Edward to change her before her coming birthday. You have to be a vampire to be a vampire and when you are bitten by a vampire, it will be very painful while you are waiting for your time to die. The moral of the story: never ever let any vampires bite you.
The movie ended when Jacob was badly injured during the fight and Bella seemed to have chosen to stick to her decision of living her life eternally with Edward. But would she change her mind later? This question will be answered in the coming sequel. There is one, isn't it?
Posted by cikgu zainal at 4:23 PM