On the way home after a wedding reception of a colleague's son in Muar, my 3 friends and I went exploring. This town is significant in a way to me because I spent my two years here studying in SMS Muar.

how many monkeys can you see in this picture?

The early plan was to hop onto a boat for a river cruise on Muar River but we were unfortunate because there was no boat to be seen. So just sat down, observing people, real monkeys and the scenery of Tanjung Mas. Finally, we just settled for a bowl of ais kacang each.

not just an ordinary mosque

Then we stopped at Masjid Jamek Kampung Raja, Pagoh, (Kampung Raja Mosque) which surprisingly has hidden history inside. There were tombs of the Sultan of the Malacca Sultanate which dated back as old as the 16th century - the history is written in the famous book of Sejarah Melayu (The Malay History).

This is the tomb of Sultan Alauddin. To understand the history better, here are some notes found on the signboard nearby:

Sultan Alauddin Riayat Shah was the seventh Sultan of Malacca who ruled from 1477 to 1488. He is remembered as a good and wise Sultan who maintained peace and security in his kingdom through a series of security outposts. He did not rely too much on his aide, Bendahara Tun Perak, in running his kingdom, preferring to oversee things himself. His death was quickly followed by infighting and dissension within the ruling classes which ultimately resulted in Malacca falling easily to the invading Portuguese in 1511.
Sultan Alauddin died under suspicious circumstances and it was said he might have been murdered. His body was interred in Kampung Raja. There is evidence that Kampung Raja was a royal town during the Malay Malacca Sultanate and that a palace was built there.

an elephant turned into a stone

According to Mr. Saat, our History teacher, the big stone outside the mosque is actually an elephant that was turned into a stone when the Sultan cast a spell to invading enemies to the town. Truth or myth? 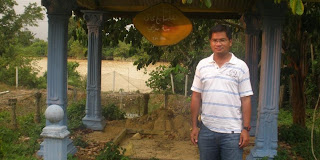 Then we stopped at another tomb, situated right beside a small road. It belongs to Panglima Yang Gagah Mat Berani (The Strong Warrior Mat Berani). He was believed to die while defending the place against the Portuguese attack in 1511. From his name, he must be a strong and brave person. And that wrapped up our short road trip in one corner of Muar, and I did learn a lot of history outside the classroom and without reading a textbook. Learning history can be fun in a way. And that happened when you went exploring with a history teacher. Thanks to Mr. Saat, the driver cum tourist guide, and also Mr. Masrizal and Mr. Sabri.
Posted by cikgu zainal at 12:00 AM